The Beavers have this term been working towards achieving the Friendship Challenge badge and have also been earning the Safety, Faith and Space badges. 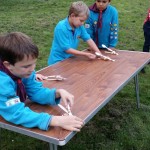 This was scheduled for the weekend of 25/26th October. However, the event was cancelled due to lack of interest. Only 5 out of 18 Beavers wanted to come. I will re-arrange in the new year. 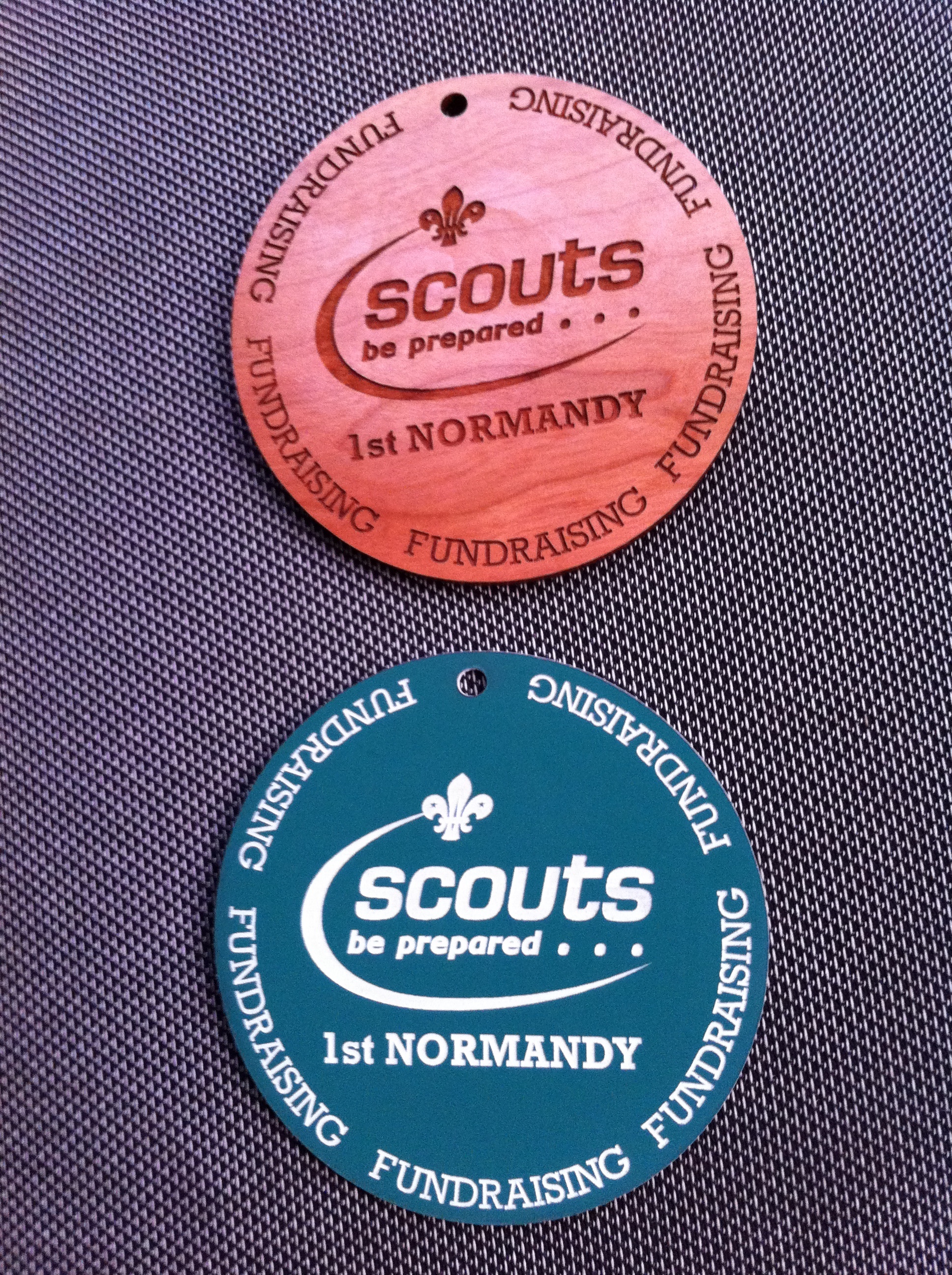 A selection of members of the 1st Normandy Scout Group were photographed this week to promote the Christmas Bazaar in the Mackenzie Smith Estate Agent newsletter.  Mackenzie Smith have kindly sponsored our Christmas Bazaar by printing our posters, flyers and raffle tickets.
Look out for our 3 large banners coming soon on a roadside near you.  (sponsored by Digital Sign Services)
We’re really looking forward to the post arriving this week – our printed raffle tickets are on their way…
We are very proud of our lovely new lanyards, made especially for the Christmas Bazaar – free of charge, and can be used over and over again at all of our fundraising events.

Premium grade Christmas trees from 1st Normandy Scout group will save you money and help us to raise money to replace our roof too!

Order online or at our Christmas Bazaar 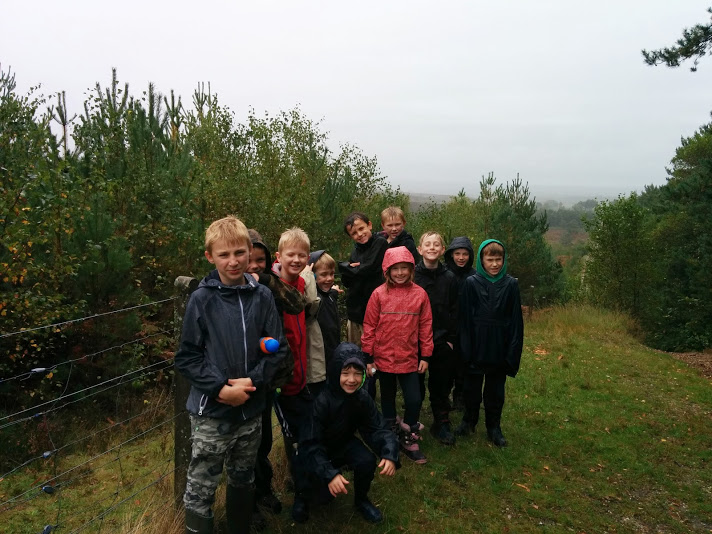 12 Cubs enjoyed a weekend camping at the Scout Hut from the 3rd to the 5th of October 2014.

The Cubs arrived at 6:30, and after helping to start put up their tents, went and joined in with the Scout meeting, whilst Akela, Shere Khan and a number of parent volunteers finished putting up the tents in the dark! Around 8pm, after the Cubs had made popcorn with the Scouts on gas burners, the tents were up and they unpacked. After the Scout meeting finished the Cubs had a light supper of Hot Dogs, followed by Hot Chocolate, before heading off to be at 10. Most of them were asleep after an hour, and Akela was quite impressed that he only had to get up once to have a word!

After a breakfast of Cereal, Bacon, Scrambled Egg and Spaghetti Hoops the Cubs had a kit inspection. They then gathered some wood for both the camp fire and the altar fire that their dinner would be cooked on.

The Cubs then headed out in their tent groups for a quick hike to the village football pitch. Whilst the leaders with them knew where they were going, all the Cubs had to go on was a list of compass bearings and landmarks to head to. All the groups got there very quickly, but unfortunately the promised heavy rain had arrived, so instead of the planned game of football, the leaders decided an extended hike was in order. 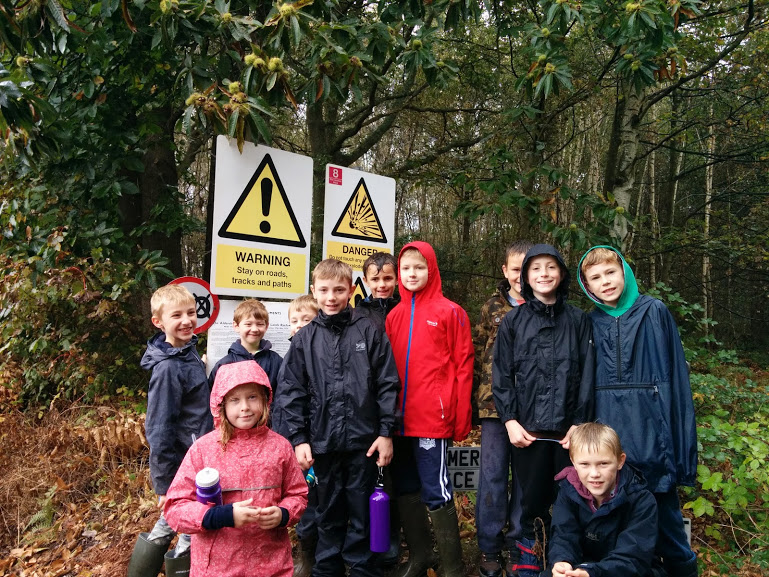 We headed north, via the cricket pitches to Dolley’s Hill and then onto the Ranges. The red flags were out, so we took a slight detour across a few boggy areas (around Whitepatch Bottom), which were expertly navigated by one of the sixers, who seemed particularly adept at finding the best route across the various water hazards. 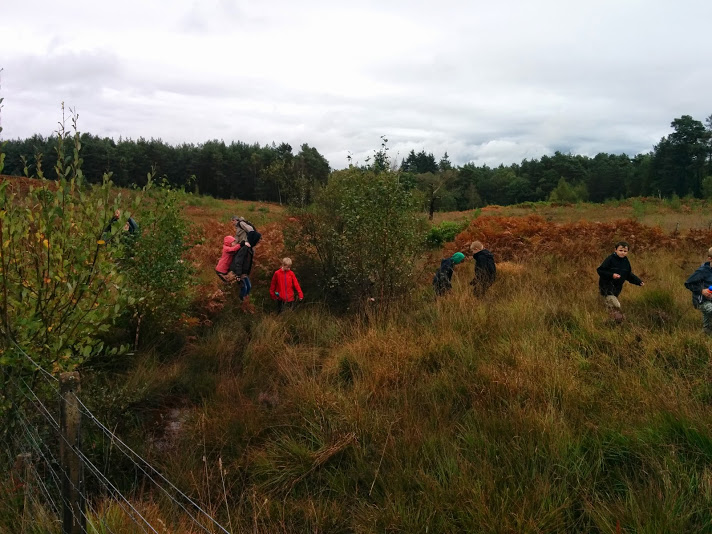 All the Cubs banded together in some cases carrying each other!

The Cubs carried on to the top of Lookout hill, where we stopped for a much needed shelter from the rain and for a refreshment break, including some lovely cakes made by one the Cubs.

We then started to head back, but on the way had a game of Capture the Flag amongst the pine trees. Spot the Cubs in the picture above!

Shere Khan headed back ahead of the rest of us to get a lunch of Spaghetti Bolognaise and Spaghetti ready.

The Cubs then spent the afternoon working on their Naturalist badge: trying to find at least 6 different tree leaves around the grounds (I think the record find was 10), surveying the stream for life (at least one baby fish was found) and making a collage from scavenged leaves, twigs and other items about the camp.

After another tea and cake break, the Cubs found more wood for the Camp fire, whilst Akela started the Altar fire for dinner (and dried out the wood!)

The cubs then had a game of Sardines, before a dinner of baked potatoes (cooked on the fire), sausages, beans, followed by baked apples and chocolate filled bananas (again cooked on the altar fire).

Akela then went to get the Campfire alight, which despite most of the wood being quite wet due to the heavy rain didn’t take long at all, and only required a small amount of shredded paper & dried kindling to get it going. 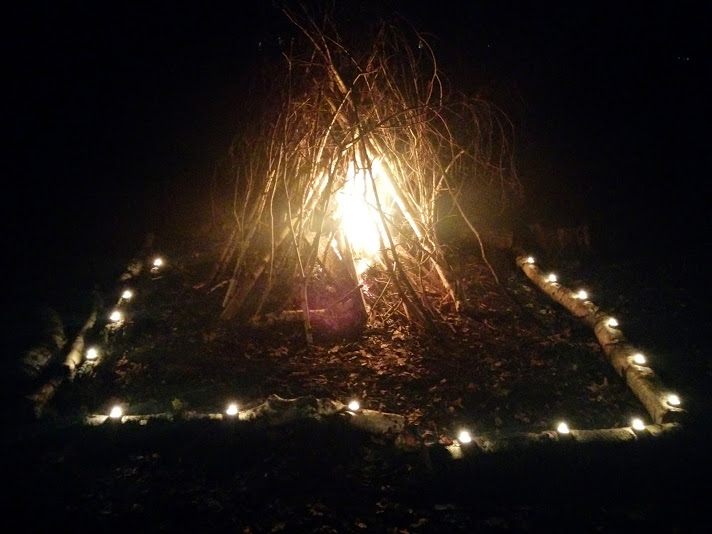 Once the fire was ready, the Cubs finished their card games with Shere Khan and headed down for a number of campfire song favourites.

A particular highlight was the Cubs unaccompanied rendition of Ging Gang Goolie. 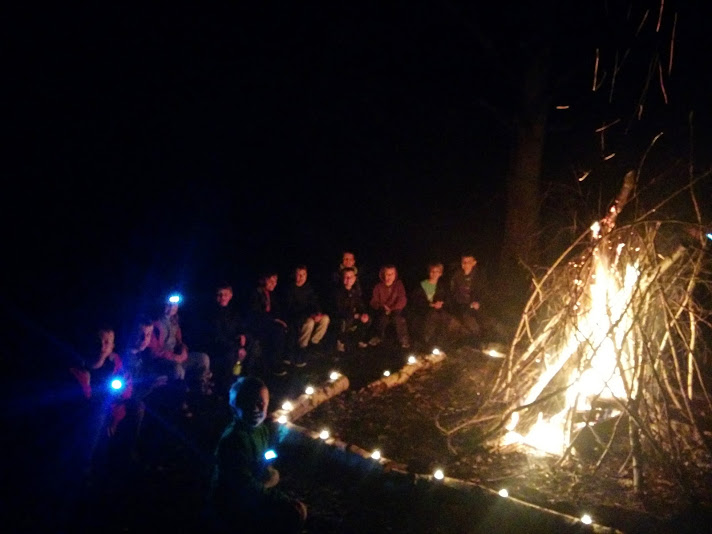 When the singing was done, the Cubs toasted some marshmallows, before heading back inside for hot chocolate and biscuits before heading off to bed for an early night. By ten there was not a whisper around the campsite! 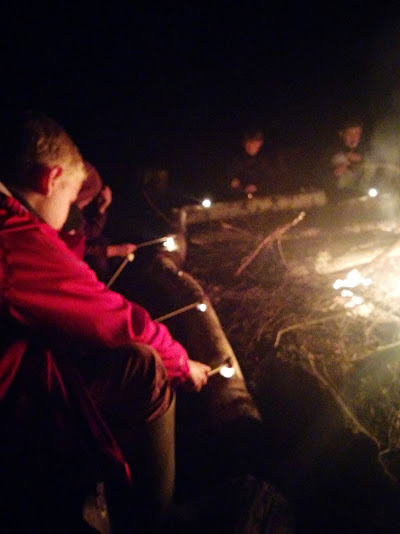 After a much colder night, the Cubs were still fast asleep at 7am, but Akela was already up making a breakfast of cereal, Eggy bread, bacon, beans and spaghetti hoops.

Then, following a quick kit inspection, it was time to strike the camp and pack all the tents away prior to the Cubs going home at 11.

Akela would like to thank the other leaders and all the parents who helped during the weekend, putting up the tents, and during the days helping with activities/cooking/washing up. As always without this assistance we would wouldn’t be able to provide the Cubs with so many activities. 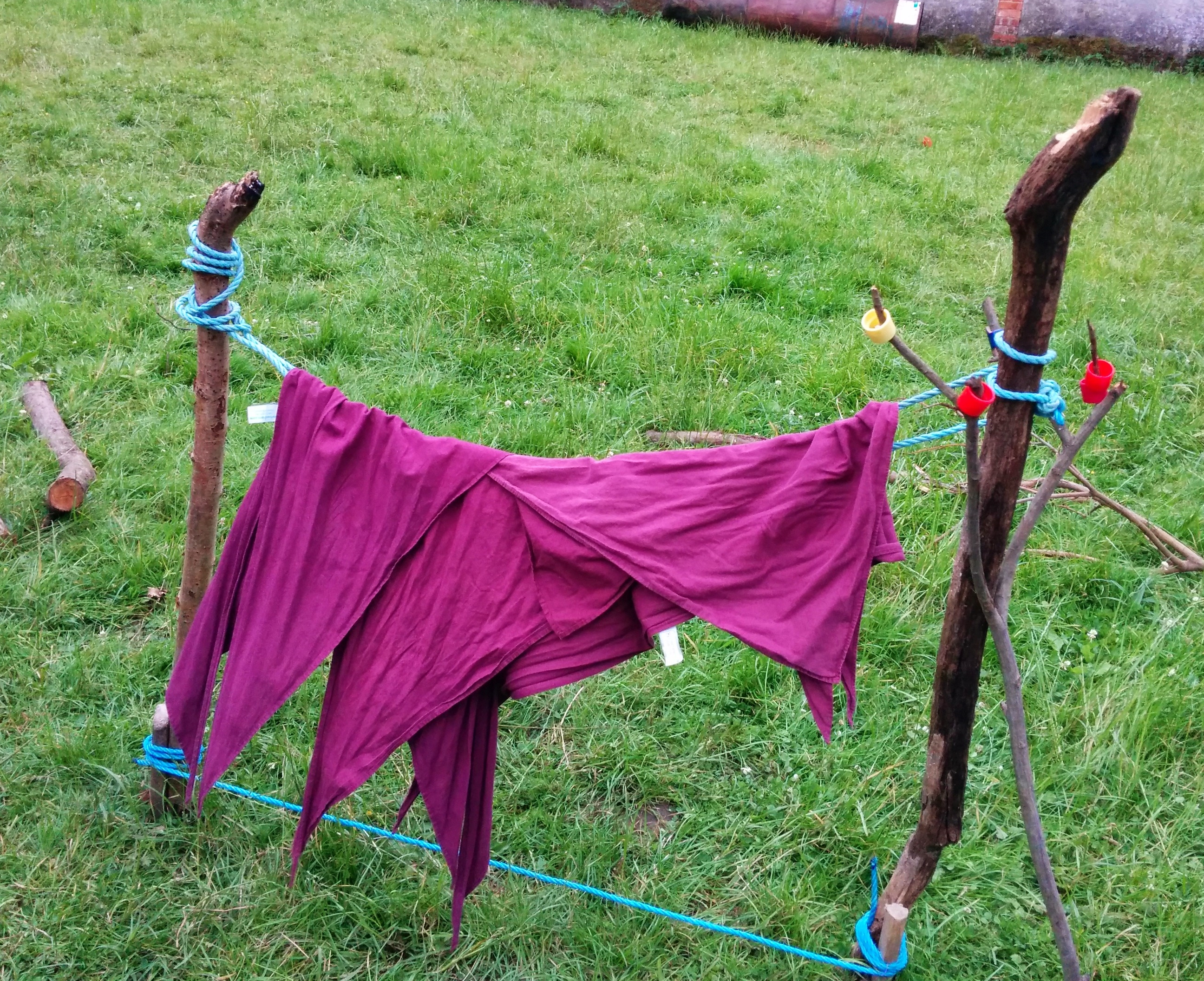 The Cubs have continued to test their backwoods skills this week, following on from last weeks shelter building and fire lighting/cooking two weeks ago.

This week each six was given a box containing:

Their task was to imagine they were stranded on a desert island and that they needed a clothes line to dry their neckerchiefs on, a scraper to clean their shoes on and a way to keep their drinking water (in the washing up bowl) up off the ground.

The results were quite varied, some sixes had very good washing lines, but rickety water holders. The foot scrapers were surprisingly inventive, with good use of rope being made – although one sixes design had to be changed when it was pointed out they’d probably trip over it quite often!

Tonight, after a wide game in the woods, the Cubs were set the task of making a waterproof shelter big enough for their whole six to sit in. Given they only had 40 minutes to construct it, the results were very good, although some were much more waterproof than others. Clearly some of the Cubs like their luxuries – some of the shelters were so large, they had room for tree stump seats in, whilst others were huddled together quite tightly! 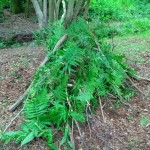 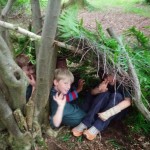 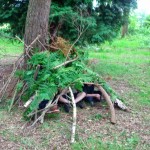 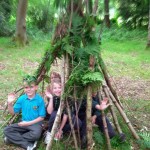 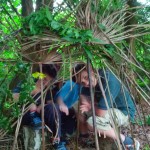 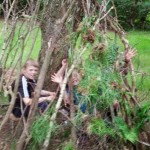 On the 7th of July, 2012, we formally celebrated our centenary with a BBQ and exhibition of the last 100 years of Scouting in Normandy, which saw many members past and present of 1st Normandy attending. The local paper, “The Surrey Advertiser” published the following article on the days events: http://www.getsurrey.co.uk/community/s/2118949_scouts_honour_100_years

All their duties will be in full uniform and the expectation that they will be exceptionally smart as they will be at the forefront of royal and other events. They wear the sash and badge of the Lord Lieutenants Cadet during their year in office. During an event or visit the role of the Cadet is normally to stay close to the Lord Lieutenant and assist wherever possible. At other times they will be expected to mingle with guests whilst remaining alert to what is going on and being ready to help.

The Group are very happy that Romy has been chosen to represent not only Surrey, but also Guildford West Scouts. 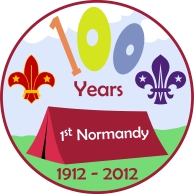 We are now well in to our Centenary year, and have a number of activities still planned, the Centenary Party, Family Camp and Open Day/BBQ. Further information can be found in our events diary.

After many excellent entries from the young people in all sections, the judges decided that Ethan from the Scout sections design for a Centenary badge was the best. The badge can be seen to the right and is now proudly being worn by all members of the group.

Again congratulations to Ethan and well done to all the young people who entered a design. They were all of a very high standard.

This year is Akela’s 25th year as a Scout having joined 1st Normandy Cubs in 1987 – to celebrate this he’s running 26 races (including a marathon) throughout the year. You can keep up to date with his progress or donate online (all monies going to the hut redevelopment fund)