The first challenge after arriving on the Saturday morning was putting up their hike tents to sleep in – something they’d never done before (and in the case of a couple of the tents, neither had the leaders!) Once everything was pitched it was time for the mornings activities to begin. We had four activity bases: Bivoauc/Basher building, backwoods fire lighting, pioneering/camp gadgets and map reading. Each lasted about 45 minutes with the sixers and seconders going in pairs to each in turn.

After two sessions, it was time to start lunch. Half were responsible for cooking on the Saturday, the other half for tending to the fire/fetching wood. With some help from the leaders, and their “magical” skills in rescuing fires the fire was ready to cook on. Lunch was Sausage, mashed potato, peas and carrots, followed by baked apples.

After clearing up lunch, it was time for each pair to do their remaining two bases. This was followed by an hour trying out new wide games. Some invariably worked better than others, and there were certainly a couple the Cubs are looking forward to playing again in the summer next year. Before dinner each six was a set a challenge to prepare and run a 5-10 minute activity for all the other sixes for the next day. In addition they were asked to prepare a short Scouts Own for Sunday morning.

Dinner was a chicken pasta bake with salad and french bread, followed by fruit pie and custard. After dinner an hour was spent going over various ceremonies and tasks that sixers and seconders are expected to perform – such as what they should teach new cubs, what’s expected in weekly inspections and camp kit inspections etc.

As the weather had been so bad the week before, and the ground so muddy we decided not to have a campfire and instead spent the evening trying out a lot of new indoor games. Despite the cubs protests about not being tired, they were all straight off to sleep after lights out – which must be a first!

Sunday morning began at 7am with a loud wake up call for the Cubs to wash and dress. At 7:30 we did some exercises before eating breakfast at 8. We then had flag break and scouts own, before a kit inspection.

Following the kit inspection the cubs had a short tour of the stores and learnt what some of the camping equipment in there was for, as well as how to look after it.

For the next two hours the Cubs split into two groups of 4, and whilst one group learnt about how to tie various knots the second group learnt about axe/saw safety and how to identify different trees around the grounds – and which of those trees were good for fires.

Lunch on Sunday was again cooked on the altar fire, it was a slightly simpler meal to prepare and cook being baked potatoes with various fillings and salad. It was followed by hot bananas with a (melted) chocolate button filling.

After lunch it was time for the cubs to run their challenges – one six ran a quiz, two had the same idea about crossing the field without touching the ground using milk crates, and one was a very elaborate treasure hunt that could have taken up a whole evening – let alone the 10 minutes they had!

Then it was time to strike camp (which proved slightly less taxing than putting the tents up!) and for the cubs to head home for what was probably an early night! 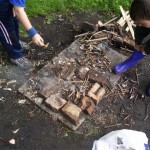 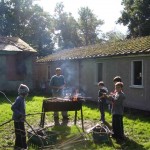 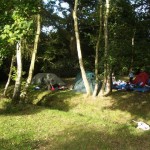 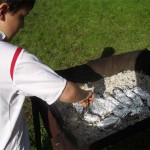